A few weeks ago, I spent some time visiting one of the few museums here in Saigon/Ho Chi Minh City: the War Remnants Museum. This place is a reminder of the atrocities committed in the name of fear and freedom and colonialism. The museum is one of the Top 3 most visited spots in the city, and I’d highly recommend it to anyone coming here, even on a short trip.

I’ve been thinking about it a lot following my trip to the motherland, and I wanted to share my thoughts about it.

The first surreal thing that you see when you enter the museum’s plaza is the military vehicles parked outside: American helicopters, fighter jets, and tanks are displayed casually, and you are free to walk around and take pictures or read facts about these killing machines. What makes it surreal is roaming around these vehicles, along with dozens of tourists from all over the world, Asians and Westerners alike.

But this is only an introduction to what you’re about to experience. It’s hard to stay indifferent once you step inside the War Remnants museum.

The Vietnam War – the second one, the one between Vietnam and the USA– happened only 50 years ago.

Over the summer, there was a temporary exhibition about the battles of Hai Phong. It was —and still remains— an important harbor for the country, importing and exporting a lot of merchandise to this day. Back then, as soon as the war was over, they resumed commercial activity in order to try and get back on track.

Next to this temporary exhibition is a display of posters and photographs supporting Vietnam’s independence. You can see people gathering all around the world, from China to Cuba, to Mexico, to France, to Germany, and even to the US. Indeed, there were pictures, primary historical sources taken at the time, showing more people protesting in front of the capitol against the Vietnam war than during the last presidential inauguration back in January.

The War Crimes room showed the damages that the US army has done, including many stories and comments from primary sources such as American War Photographers on the ground, who took those cliches before the US GIs executed defenseless men, women, and children running from the fields, in cold blood. 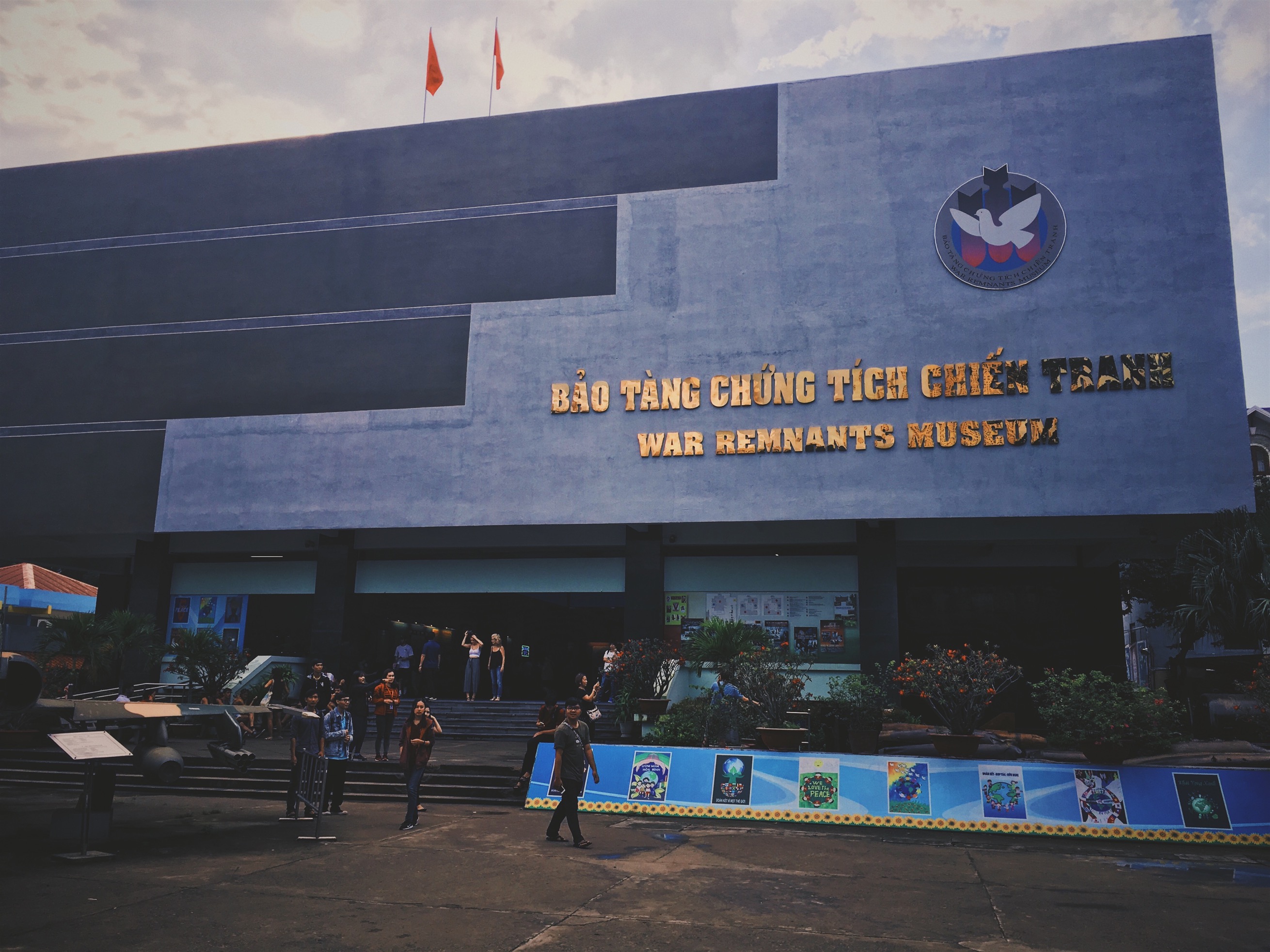 Like other countries which were formerly under a colonial domination, Vietnam has paid a huge price for its independence. Whether it’s the 3 Million of Vietnamese people who were killed, among which 2 million were civilians or the infrastructure that was lost and had to be rebuilt, I can’t help but think how further along in its development the country would be today without these human and material casualties.

As I understand it, the US had two goals in mind when it came to the Vietnam War: preventing another country from swaying on the Communist side, while at the same time continuing to get resources from the country — in the case of Vietnam, a lot of tungsten. However what they did to try and keep this influence and these resources was reckless —and useless considering the outcome of the war:

The Napalm bombings exhibition was pretty shocking, with pictures of bodies, torn and shredded. It’s been well documented over the years, with the infamous image of the little girl running from the fields after being one of the numerous victim burned from napalm.

But worse yet, the Agent Orange exhibition was even more disturbing and hard to shake off my mind: it’s a clear case of the US Army using chemical weapons in a time of War. And seeing this part of the exhibition actually brought some memories from just 9 years ago.

9 years ago, during my first trip to Vietnam, with my family, we were taken to the countryside by our guide, who showed us some local villages. This was in 2008. And yet, it struck me when we met villagers who had been of the first, second, and third generations of Agent Orange casualties.

It is hard to describe the pain, the void, and the shock of realizing that this was not only a crime with monstrous immediate results, but that the impact and the legacy of the decision to use these chemical weapons has endured half a century later.

As an aside, while searching online, I noticed that a lot of people complained about how the museum only tells you about the point of view of the war from the Vietnamese side. Being in Vietnam, and considering Vietnam has won its war, I don’t really know what these tourists and online commentators were expecting. As they say: “The ones who win their wars are the ones (re-)writing History”.

It’s hard to think how often History has repeated itself, and yet, how much better we fare, Humanity as a whole, then in any previous time in History.

During the different trips to Vietnam that I’ve been lucky enough to take throughout the past few years, I’ve come to realise that Vietnamese people may be amongst the most hardworking and resilient people I’ve come across.

I want to say that it comes from History, from having so much pain and drama and results in the current state of the country, under a fairly liberal economy and a communist regime that is fairly lax when it comes to foreigners, but still rather authoritarian and restrictive when it comes to its own citizen.

In Saigon especially, I’ve noticed that a lot of the young people I was meeting were happy to discuss the current state of things with me, their disappointment in the current government’s practices and corruption. And at the end of the day, no matter where we come from, we all seem to have the same aspiration: live comfortably enough, and make sure that our children have a better quality of life than what we’ve had.