We left the apartment at an early 6.45am to walk towards Dublin’s Connolly station. There, we met with Shana’s coworker M and her boyfriend M.

We hopped on the train and discovered that our names were appearing on a little display above our seats. Those little details can make us nerds so happy! Over the next two hours, the duration of our trip, we spent our time talking and learning more about M&M — they are both from Sweden and arrived in Dublin about two and a half months before us. We’re still all adjusting to Ireland and life in Dublin, and it’s nice to find another foreign couple who can sympathize with us, and who we can sympathize with.

We arrived in Belfast just before 10am, ready to grab a quick bite and discover the city.

Walking from the station, we headed in direction to what seemed to us like the center of the city and ended up in front of the city council.

It actually makes a lot of sense: as we learnt throughout the day, Belfast was one of the biggest ports from which European migrants would leave for the US. As they arrived on the East Coast of the United States, they were inspired by the architecture from “back home” when designing institutions in their new lands.

Walking all around town, Shana couldn’t help but be reminded of Washington, Baltimore, Philadelphia, New York, and Boston — a comfortable little slice of home. 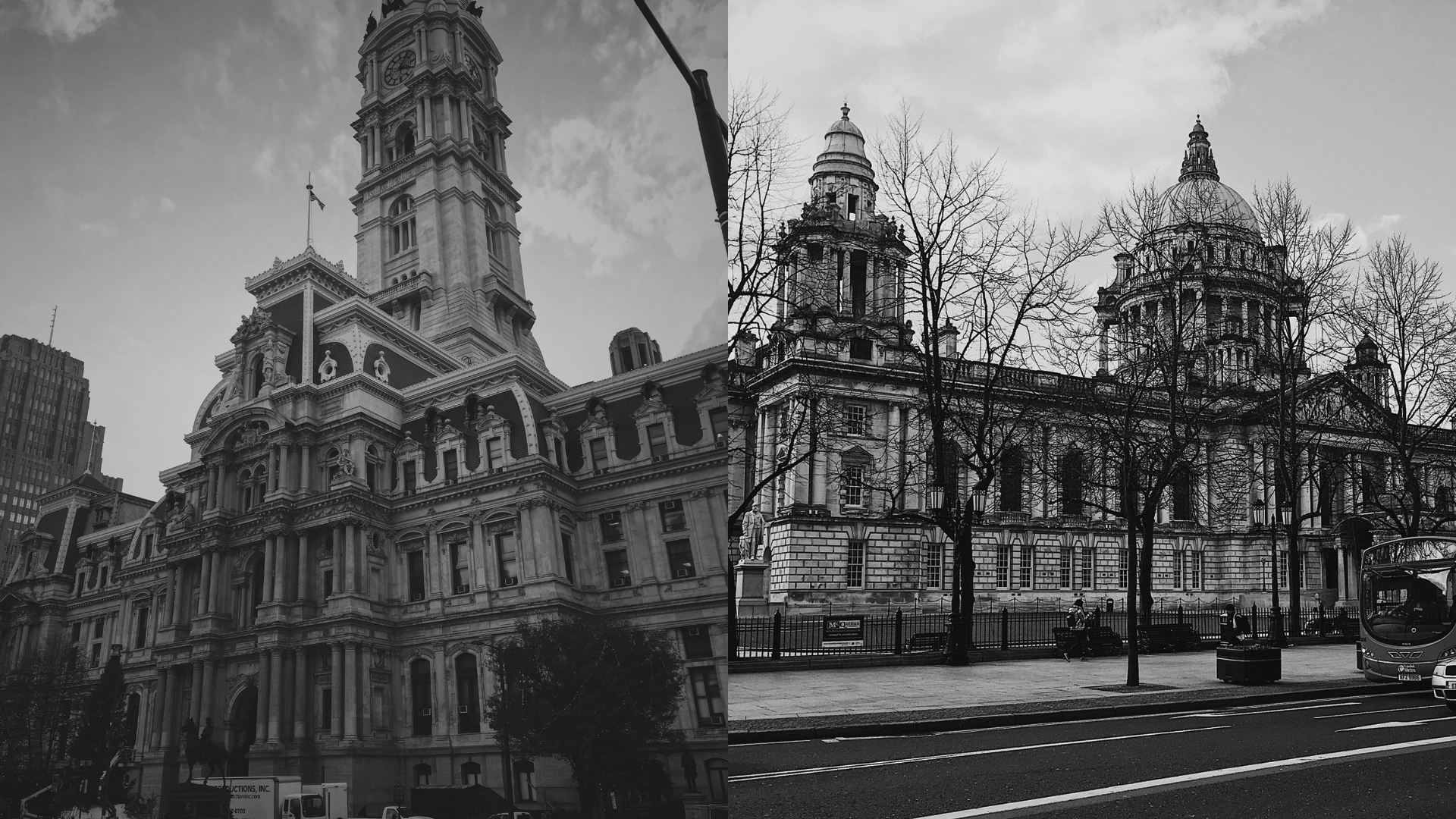 My original picture of the Philadelphia City Hall was in Black & White. So I added a black and white filter to the Belfast image above to compare both of those. Quite similar indeed.[/caption]

After a quick walk around the center of the city, and a pit stop to snack on some delicious crepes in a parisian café, we headed towards the harbour to visit the infamous Titanic Museum.

The museum itself is inside of a beautiful modern structure, with big aluminium panels, while there is a rusting sign outside, welcoming you as you enter the area.

Over the following two and a half hours, we learnt a lot about Belfast at the turn of the 20th century, and how it was one of the major ports from which immigrants were leaving. They were hoping to get reach the United States to start a more prosperous life for their children and themselves. 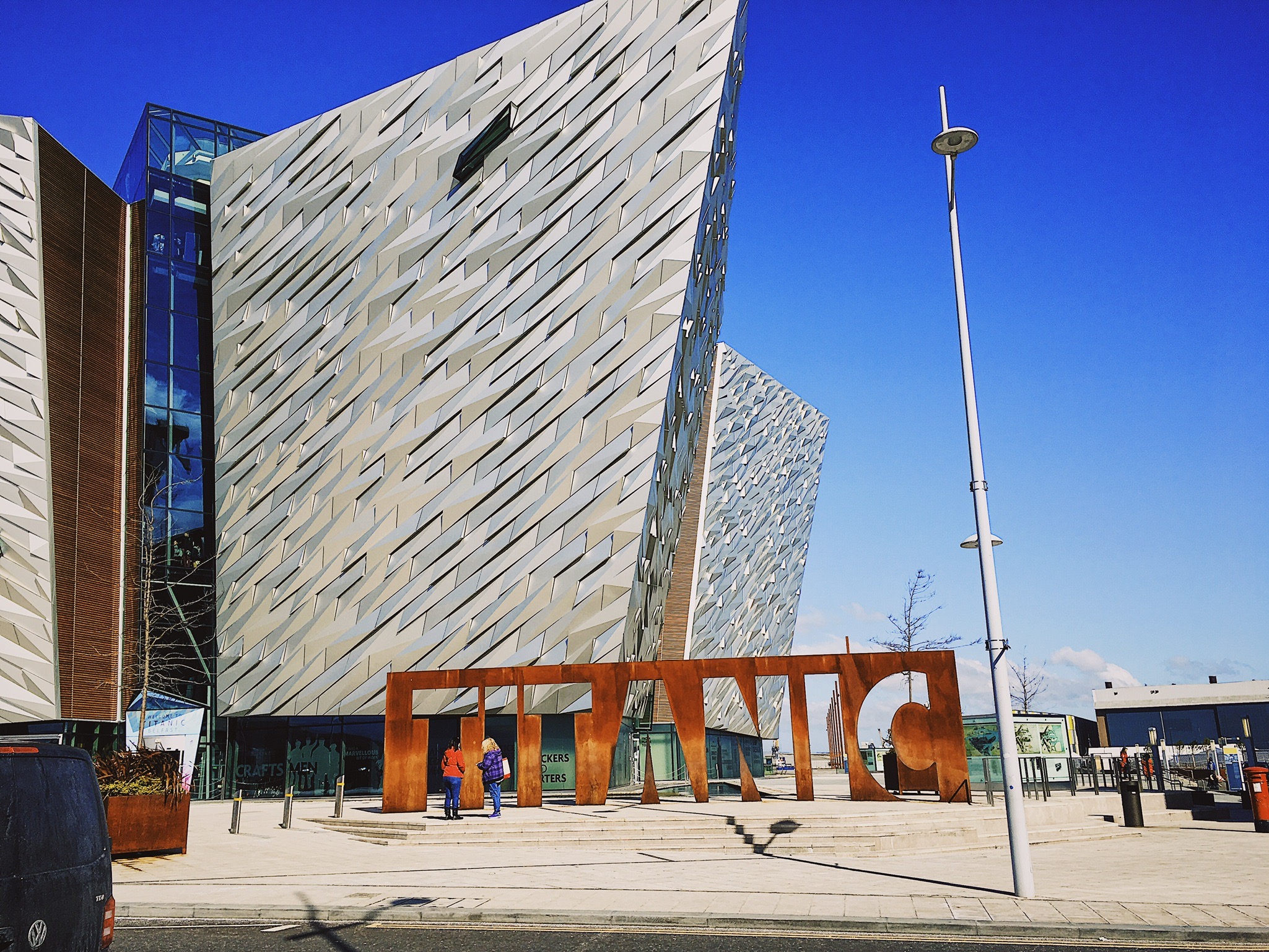 After establishing the context for the early 20th century in Belfast, we got to learn about its local industries and how big it was in terms of a ship-building area. This naturally led to the actual Titanic, the one the infamous 1997 movie is based on.

It was really impressive to see what it took to build such an immense ship. And it made it that much sadder and intense when we listened and read the actual final transmissions of the HMS Titanic, which sank on April 15, 1912.

Thankfully, after two and half hours in the museum, the sun was still out and we walked back towards the city, discussing what we had learnt with our new swedish friends.

We were all starting to be pretty hungry as the clocks reached 2PM and found a lovely gastropub called The Cloth Ear. We were expecting your regular burger and chips, but the menu looked really original. And when our plates arrived, we were just extatic.

After lunch, we spent the last remaining hours walking in the sunny and windy streets of the old town, telling ourselves that we’ll need to be back around the summer to enjoy what seems to be a potentially vibrant summer nightlife.

Belfast was full of hidden bars nested in smaller alleys off from the high street, just the type of place we like to hang out at when the days are warmer.

This was a very quick trip, but one that left us wanting to experience more. We’ll be back, Belfast!